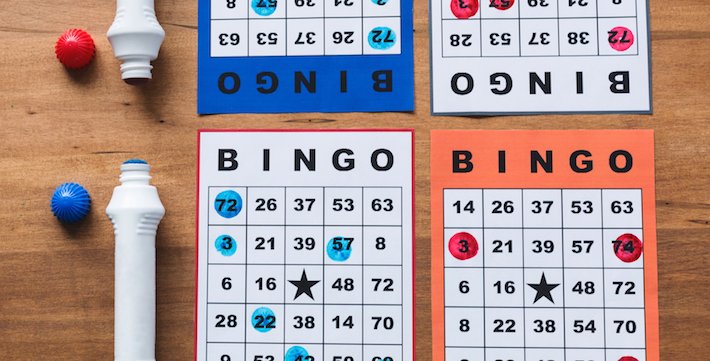 If you’ve ever wandered into a bingo hall, you know that bingo calls are part of the fun. Bingo callers have traditionally used nicknames to announce the numbers on the board by attaching short rhymes like “5 and 9 Brighton line.” The players join in by repeating the clever calls. The regulars know these by heart but still burst out laughing when some of them are called.

Throughout bingo’s rich history, the numbers were linked to various phrases, including funny rhymes. Others are far less creative. For instance, 12 is a dozen, and 24 is two dozen. Meanwhile, younger generations put their stamp on the game by introducing lines from pop culture. We’ve compiled a list of all the traditional and modern phrases, as well as the history of these calls. These are some of the basics you need to know before you head to a bingo hall or fire up the game on one of the popular bingo sites.

The Origin of Bingo Number Names

The game of bingo already has a very rich history, but what about naming the numbers? When did that happen? Like the game itself, the calls we hear today are quite old, and many date back to the days of the Second World War. Turns out, Allied soldiers kept their spirits high by playing a lot of bingo in between battles. At the time, the game was called Housey Housey, but the rules were similar to the game we play today.

Surprisingly, up until that time, the players didn’t use any bingo nicknames for the numbers drawn. The soldiers then started naming each number or shouting funny and often dirty phrases whenever the host announced a new number. A lot of the names stuck and are still being used in bingo halls across the country. Most calls are little more than simple rhymes, but some mock the appearance of certain numbers. Others are references to popular TV and radio shows, everyday life in the UK, as well as British politics and traditions.

When you go to a bingo night, you’ll most likely hear both the hosts and the audience shout out these phrases. They’re not just saying them randomly. Every single number, from 1 to 90, has a nickname. Of course, the calls changed over time, but some are just mainstays for bingo halls in the UK.

Here’s the complete list of calls. Of course, some of the rhymes are more discernible than others, which is why we’ve provided explanations for a few of the references. Perhaps unsurprisingly, there aren’t as many dirty bingo calls as there were back in the 1950s, except one that probably doesn’t need any further introduction.

1 – Kelly’s eye – This is widely believed to be a reference to Australian outlaw Ned Kelly.

2 – One little duck – The number resembles a ducking, and players will usually respond by quacking.

9 – Doctor’s orders – Number 9 was the name of a powerful laxative given to British troops during World War II.

10 – [Prime Minister’s name]’s den – A reference to 10 Downing Street, which houses the official residence and office of Britain’s premier.

11 – Legs eleven – One of many funny bingo calls that refers to a pair of slender legs.

21 – Royal salute/Key of the door – Players either reference the 21-gun salute or the traditional age when young people move out of their parents’ house.

27 – Gateway to heaven/Duck and a crutch – While the first of these is one of the more obvious bingo rhymes, the second is a visual reference. In addition to the aforementioned number two, the number seven is thought to resemble a crutch.

30 – Dirty Gertie – A reference to the La Delivrance statute in North London, which was nicknamed Gertrude.

35 – Jump and jive – A reference to the jive dance style, which was born in African-American communities in the 1930s.

39 – 39 steps – One of the more traditional bingo calls, referencing the famous Alfred Hitchcock movie of the same name.

40 – Life begins – Derives from the saying “life begins at forty.”

43 – Down on your knees – A widely used military phrase in wartime Britain.

52 – Danny La Rue – This is one of the more interesting bingo number sayings and refers to a popular Irish cross-dressing singer.

53 – Here comes Herbie/Stuck in a tree

56 – Shotts Bus – This was the number of the bus that covered the Glasgow-Shotts route.

57 – Heinz varieties – Refers to the “57 varieties” slogan that appears on Heinz ketchup bottles.

59 – Brighton line – This is widely believed to be one of many bingo number calls referencing public transportation. Engine 59 ran between Brighton and London.

76 – Trombones – Among the many bingo calls in the UK, this one references the Marching Man musical and its popular marching song, “76 Trombones.”

88 – Two fat ladies – This is another visual reference to two plus-sized ladies standing side by side. But these rude bingo calls are slowly being killed off in chat rooms by Millenials.

90 – Top of the shop – This is the highest bingo number. Bingo players often say “shop” instead of “bingo game.”

Now that you’re well versed in bingo lingo, it’s time to move on to the next step. To become a master of the game, you need to know more than just the traditional calls. You’ll also need to keep up with the latest trends. To make sure you don’t fall behind your fellow bingo players, we’ve compiled an additional list.

Like the game itself, lingo has evolved over time. What used to be hip back in the day is not something that younger generations can relate to. Therefore, some rhymes had to be modernized, or bingo players simply made new phrases and rhymes more common. Most of the traditional calls managed to stand the test of time, while others came and went in the blink of an eye. Some argue that bingo players kept dishing out too many jokes for rhymes, trying to create alternative bingo calls at any cost. This is true to some extent.

Here are some of the jokes, puns, and rhymes you’ll hear in bingo halls:

Of course, we at BestBingoUK had to name some of the bingo numbers ourselves. So, brace yourself. Here come the puns! Don’t say we didn’t warn you.

9 – Brunch would be fine

42 – Vogons can come, too (Hitchhiker’s Guide to the Galaxy reference)

What are the bingo sayings?

In the world of bingo, people associate certain phrases with each of the 90 bingo numbers. These include funny rhymes and pop culture references.

How do you call bingo funny?

Bingo is a fun game, but seasoned players take things to another level with the lingo they use. These are short phrases and rhymes that players shout out when a number is called, such as “3, cup of tea.” This adds an extra dose of fun to every game of bingo. If a player makes up a rhyme that’s especially funny, an outburst of laughter is guaranteed.

What is the bingo call for 21?

For 21, bingo players usually respond with “royal salute,” a reference to the 21-gun salute. The other call is “key of the door,” as 21 refers to the traditional age when young people moved out of their parent’s home.

What is bingo lingo?

When a game is as popular as bingo, a lingo develops over time. Bingo players have their own witty and funny phrases that they say when a number is drawn. Every single number has an accompanying phrase, and the more you know, the more fun you’ll have at your next bingo night as you join fellow players in shouting out the rhymes.

Among the many bingo calls, PC is the nickname used for the number 49. It dates back to the mid-1940s and early 1950s when a show about a police constable Archibald Berkeley-Willoughby aired on the radio. The show was called The Adventures of PC 49.