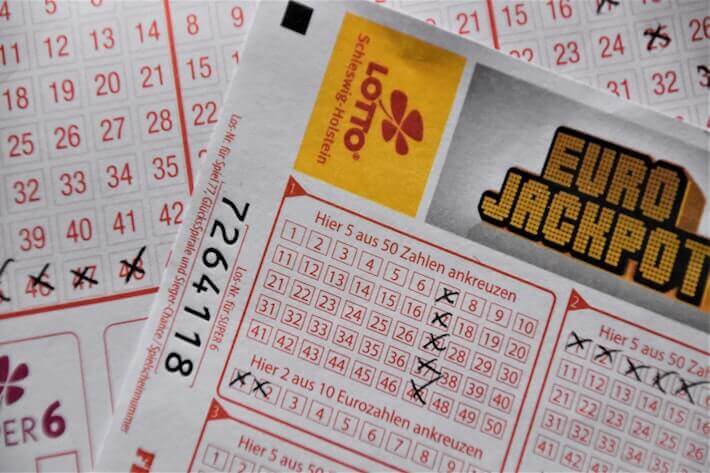 Similarly to bingo sites,  lottery is on the rise, gaining popularity among many people across the UK – about 45 million of them. Did you know that 70% of the UK’s adults regularly participate in the National Lottery? All this and much more will be revealed as you dive into our biggest lottery win figures, and some of them might even become your lucky numbers.

1. People between 45 and 64 years of age are the most likely participants of a National Lottery game.

Based on The Taking Part survey conducted by the Department for Digital, Culture, Media & Sport, 54% of people aged between 45-64 played a National Lottery game in 2019/2020.

44% of surveyees played a National Lottery game at least once within the twelve months. Of all the games, the most popular choices were Lotto (71% of National Lottery players) and EuroMillions (60%).

The biggest jackpot ever won in the UK happened on October 8, 2019, and the winner decided to stay anonymous. The base amount was about  £15 million, but the jackpot kept increasing, reaching its maximum after 18 consecutive rollovers. The winner was lucky enough to match all the numbers and obtain the entire prize of £170.2 million.

The previous record was held by Chris and Colin Weir from Largs in North Ayrshire, Scotland. In July 2011, they won £161.6 million.

3. The biggest jackpot win in the EuroMillions history was €210 million.

The biggest ever EuroMillions win happened earlier this year when a ticket holder from Switzerland acquired a prize of €210 million on February 26. There’s not much information about the winner except that they purchased two tickets online at a total cost of seven Swiss francs. One of those two, of course, was the winning ticket.

4. 22.2% of all EuroMillions jackpot winners came from the UK.

EuroMillions tickets are being sold in nine countries: the UK, the Republic of Ireland, France, Spain, Austria, Belgium, Luxembourg, Switzerland, and Portugal.

Of all the jackpot winners, only three are from Luxembourg. The majority of lucky strikes belong to the UK lottery winners list, counting 113 people or 22.2% of all EuroMillions winners.

5. Over 90% of winners continue to buy lottery tickets.

You would think that winning the lottery once is a once-in-a-lifetime blessing. However, 70% of winners are convinced they will get lucky again.

An interesting fact shows that, in the UK, over 10,000 people use the numbers 1,2,3,4,5, and 6 every week, meaning that if these numbers were drawn, the ticket holders would all need to share the prize, leaving them with as few as several hundred pounds.

Maybe those jackpot winners who think they can get the highest lottery prize again aren’t far from the truth, as one player got the winning combination twice. If you wish to learn how to win the lottery, you should probably ask Mark Clark from South Rockwood, Michigan. Clark scratched his first winning ticket on December 12, 2017. Just three years later, on June 4, 2020, he did it again.

Soon after the first win, Clark retired and dedicated his life to fishing. After the second time, he said he’d go back to his old quiet life and enjoy time with his family.

7. An Australian won $1 million using the numbers his family has played for 50 years.

Even though he did not end up being the biggest lottery winner ever, the Brisbane player surely felt like one when fortune smiled on him after 50 years of waiting. Sticking to the same numbers his father chose half a century before finally paid out, earning him $1 million.

The winner from Australia matched all six numbers in the Gold lotto drawing on August 17, 2020.

8. A family syndicate from Dublin won a jackpot worth £152 million.

On February 19, 2019, an Irish family got a fantastic £152 million prize after winning a jackpot. It was the biggest ever lottery win in Ireland, and Kathleen and Charlie Sheridan got to share it with their family members and friends.

A syndicate of 10, including nine bus drivers and company secretary, scooped £1 million. The lucky EuroMillions draw took place on April 16 this year, and each winner will get £100,000 out of the astonishing prize.

All members of the syndicate are between 30 and 65 years old, and they all have different ideas on how to spend their prize money.

The biggest single lotto winner ever comes from South Carolina, but their identity is still unknown. On October 23, 2018, this lucky individual won the highest jackpot in the history of Mega Millions. It took four months for the winner to collect the prize, and once the taxes were deducted, the final amount was $877 million.

There’s an interesting story saying the winner let another person go ahead in the queue to buy a lottery ticket. This courtesy resulted in the lucky player ending up with the golden one.

11. A 36-year-old cleaner from Berlin made a record-breaking win.

The biggest online lottery win that made it to the Guinness World Records list happened when the winner placed a bet on EuroJackpot via the Lottoland app. Christina, a 36-year-old cleaner at the time, won €90 million in the summer of 2018 after placing her second Lottoland bet ever.

Christina, who was working late-night cleaning shifts, quit her job and decided to treat herself with travels to countries she couldn’t afford to visit before.

John Orchard is one of the biggest bingo winners in the history of the game. The 60-year-old former factory worker from Lincolnshire had only been playing on the Butlers Bingo website for a few days before the bingo slot changed his life completely. One of the UK’s biggest lottery wins occurred on December 12, 2012, and we bet 12 has been his lucky number since.

Orchard placed a bet of only 30p on a video slot game based on the Batman film The Dark Knight, and the rest went down in history. This interesting fact tells us that, sometimes, even the best slot strategies can’t beat blind luck. After banking his prize, Orchard left his job, swapped his Renault for a Jaguar, and got his daughter a house.

What is the biggest lottery win in the UK?

The biggest UK lottery winner snatched a jackpot of £170m in October 2019. The lucky player decided to stay anonymous, so there is not much information about where the ticket was obtained or if the winner is an individual or a syndicate. Prior to this, Colin and Chris Weir from Scotland held the record with their £161.6 million win.

What is the biggest unclaimed lottery prize?

The highest unclaimed lottery prize was the $396.9 Million Powerball Jackpot won in January 2020. The winning ticket was sold at a store on Bonita Beach Road in Bonita Springs, Florida.

When it comes to the UK, the biggest ever unclaimed lottery win was a £41 million EuroMillions jackpot.

Has a rich person ever won the lottery?

As some of the winners are still anonymous, how many rich people got wealthier by winning the lottery is not something that can be confirmed for sure. There is, however, at least one such person – Jack Whittaker. Prior to winning the lottery jackpot, Whittaker was a renowned American businessman in the construction industry. At the time of his windfall, he already had a net worth of over $17 million, which surely makes him one of the wealthiest people who ever won the lottery.

What is the biggest lottery win ever?

The biggest win awarded to a single ticket owner was a $1.54 billion lottery prize. The jackpot went to South Carolina in 2018.

Although the $1.59 billion Powerball jackpot from 2016 is the largest lottery prize ever, it was split among three ticket winners in California, Florida, and Tennessee.