Gambling and VR: New Frontiers for the Casino Industry 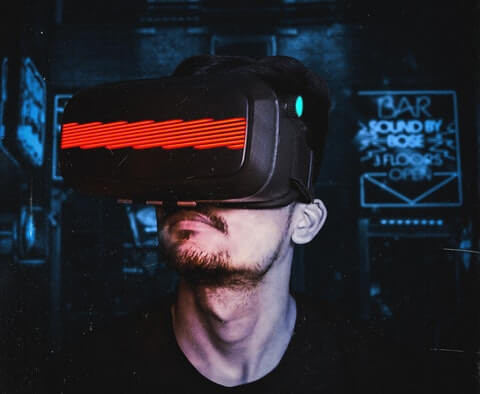 Online casinos are multiplying these days. With seemingly endless competition and new sites popping up daily, it can be tough for a newcomer to stand out from the crowd. Gambling in VR, interactive experiences through AR and VR systems, chatbots, and behavioral analytics are just some of the ways that technology is being leveraged by casinos in an effort to get a leg up on the competition.

Is there a place for virtual reality and artificial intelligence technologies in gambling? Let’s take a look. Along the way we’ll analyse the marketplace and see how innovative AR technology is bringing affordable augmented reality to punters worldwide.

People began experimenting with VR tech long before the advent of virtual reality casino platforms. Pioneering steps were taken in the 1960s with Sensorama and the Sword of Damocles.
Sensorama was a bona fide multi-sensory gadget for watching films, containing a stereoscopic color display, fans, odor emitters, stereo sound, and a motion-sensitive chair.

It was one of the earliest VR devices and a prototype for virtual reality technologies to come. The Sword of Damocles was a heavy, unwieldy device suspended from the ceiling – yet it is still considered the first true head-mounted display with a mechanical tracking system.

Virtual reality casino games would have to wait several more decades for the technology to trickle down, but VR made its way into console gaming in the 1980s and ’90s. Atari was a pioneer with Battlezone in 1980, followed by Sega’s VR system for consoles in the early ’90s and Nintendo’s Virtual Boy in 1995.

Although it seemed VR was on the verge of a mainstream boom, it took until 2010 for the prototype and 2014 for shipping versions of the first Oculus Rift devices – heralds of the modern VR era. With hundreds of companies now working on VR technology, it has finally started to make an impact in the casino industry as well.

VR and AR in the Gambling World

VR in the casino industry is still in its infancy. One of the world’s largest virtual poker rooms, PokerStars, has launched a virtual reality free-play version of poker on the Oculus Store, and numerous companies have dabbled in VR gambling games and slots. But that’s about it.

The main problem new casinos have had to face was attracting real-world players into the online domain. Those who love the interactive nature of brick-and-mortar gambling houses say that even with virtual reality, the whole gambling experience in online casino gaming systems feels artificial. You can’t bluff effectively if the other poker players can’t see you. You just don’t feel the same rush playing slots or roulette when physical interaction is replaced with random computer calculations.

This is where VR tech could make a big difference: bridging the gap between the authenticity of the real-world experience in land-based casinos and the practicality of being able to play popular games from the comfort of your own home. VR casino innovations are the natural next step in the evolution of online casinos.

So what is the VR casino experience like, and what can it offer to persuade players to make a switch? Realistic slot machines, detailed 3D game tables and rooms, authentic 3D sounds, and in-game chat with other players and dealers are just some of the options.

One of the biggest problems with translating popular card games to online platforms is the lack of player interaction. Poker players want to believe they’re outsmarting other players, not just relying on luck. VR casinos can bring numerous enhancements to the typically sterile online poker game, bringing it almost up to par with the real thing.

A realistic depiction of a blackjack table or even a complete movie-like scene in a seedy-looking casino can transport you away from the kitchen table and into a realistic fantasy of playing a real high-stakes card game. 3D positional audio-based live chat with other players makes you feel further immersed in the action.

A real-looking card dealer in a virtual reality casino will deal you your hand, which you will physically pick up and hide from other players. The technology is already here. Now it’s up to the imagination of the game designers and how much they want to immerse you in the setting.

While slots and roulette are by their nature much more reliant on random number generators than player skill, seasoned punters like to believe they can influence the outcome of these games to a degree.

Gambling in VR solves a major problem for people who feel like online gambling is missing that key ingredient of active player participation. Clicking your mouse or tapping a smartphone screen just doesn’t offer the same level of interactivity that physically pulling a slot machine handles does. And roulette is much more fun when you can interact realistically with the croupier and other players.

If you’ve ever gone searching for virtual casinos, you’ve probably noticed how sparse the selection is. Sites like SlotsMillion and MrGreen are some of the best-known pioneers of using virtual reality and artificial intelligence in casino gaming. They offer more than 40 virtual slots, various table games, and even poker. And big brands like PokerStars have also started embracing the trend, if only in the R&D labs.

The problem is that true VR requires a significant investment from players. Augmented reality has been popularised and made widely available on mobile devices by the likes of Snapchat and Samsung, but investing in a proper VR setup requires spending money on both a reasonably powerful computer and an expensive headset.

VR gambling is gradually becoming more affordable. Although gaming headsets like the HTC Vive and Valve Index cost more than a mid-range PC, Samsung’s Gear VR and other affordable headsets are bringing virtual reality to the masses.

AR casino rooms offer a more realistic online gaming experience at a fraction of the price required for a full virtual reality set. As more and more people start adopting both augmented and virtual reality technology, we can expect the popularity of virtual casinos to surge as well.

Gambling and VR: What Does the Future Hold?

With many big names in the entertainment industry embracing augmented and virtual reality technologies over the past few years, big strides have been made across all fields. But when it comes to online gambling technology, artificial intelligence has held more appeal for site operators thus far.

Technologies like machine learning, natural language processing, and blockchain gambling have led to major advances in casino game fairness verification, cheating detection, and prevention – as well as virtual assistants and live chatbots that serve to bridge the gap between real and online gambling.

Big game companies like Microgaming and NetEnt have thoroughly embraced VR technology and are building more impressive platforms and games every year. With several big brands picking up on the trend and popular slot games such as Gonzo’s Quest and Starburst already getting AR and VR versions, we expect it’s just a matter of time before the biggest gambling operators start realising the potential of the technology and implementing a VR iGambling platform into their online networks.

How do I start playing Virtual Reality Casino games online?

You need to find a VR casino and make sure you have all the necessary equipment. To play comfortably, you need to make sure you have a VR headset as well as a computer or mobile phone with sufficient power to run AR and VR titles. You then simply log in, create an account as you would with any online casino site and find your game of choice.

How much does a VR set cost?

A typical VR headset ranges between $100 and $500, depending on the specs. For the purposes of current-gen gambling in VR, cheaper headsets such as Samsung’s Gear VR can do the trick just fine, saving you hundreds of dollars on the more expensive models aimed at high-end PC and console gaming.

Of course. Like other online casinos, virtual gambling sites offer enticing rewards for both new and veteran players in the form of bonus funds, free spins, and more.

Are players from all over the globe accepted at virtual reality Casinos?

No. The rules found in traditional casinos apply here as well. Some support a wider range of accepted countries, but there is no casino in the world without at least some country restrictions, and virtual casinos are no exception.